There are excellent Thai restaurants on Koh Samui which serve dishes from all of the regions of Thailand. There are many places in Koh Samui from road-side vendors to high end 5* restaurants in Chaweng. What places you visit depend on your budget.

Typically places in Chaweng are more expensive as it is the main tourist center. Good food can be found but in our opinion the majority is pretty mediocre for the price they charge (the price reflects the rent they are charged!). Our top tip is to look outside of the main tourist areas on the main ring road where there is plenty of good quality, authentic and affordable Thai food. A general rule of thumb is to look for restaurants that have a lot of locals in.

You can find cheap local Thai food stalls, food centers, soup stalls and other rather basic restaurants along the ring road. It is normally delicious and the prices are very reasonable. 40-100 baht per dish is common. Boiled drinking water and ice is commonly served free.

Located in the Chaweng food center. A large variety of fresh fish and seafood for good prices. The Red Snapper in garlic butter with different sauces to dip is unbeatable. Lots of Thai dishes and international food on the menu, but we recommend only Thai dishes… the international food here is not recommendable.

The Thai BBQ in Bophut is a local gem in Koh Samui and is known by all locals (Thai & expat) but rarely sees tourists. Thai BBQ in Thai is pronounced as moo-gra-tha or moo-ka-ta, which means pork skillet.

Essentially moo-ka-ta is a combination of a hotpot and BBQ. Basically, its a dome shaped pan with a rim around the edge over hot coal, which is placed in the middle of a table (usually for up to 4 people) that you share to cook the food you want. The idea is the middle is used for cooking meat and the rim for vegetables, noodle and soup (and anything else you want to boil, e.g. egg or shrimp). For those who have had Korean BBQ, it is very similar.

Im going to sell it early on by saying it is (to date), 139 Baht for all you can eat. If that isn’t enough to catch your attention, they have pretty much everything imaginable: marinaded beef, pork and chicken, shrimp, squid, shellfish, liver, kidney, every type of vegetable known to man, seaweed, sea sponge, dim sum, fried rice, french fries, laab (spicy meat salad), som tam (spicy salad), fish cakes, Thai tacos (that’s basically what they are), fresh fruit, cake, ice cream and so much more I can’t remember it all.

You simply grab a plate and help yourself to what you want then go cook it on your BBQ!

Especially on Koh Samui where there are so many expensive restaurants, Thai BBQ is fantastic value for money. Its also very healthy and for visitors a proper Thai experience. Do expect to pay heavily for drinks (this is where they make money) but even so is still cheaper than the bars. You will also get charged around 20 Baht for the bucket of ice for your drinks too, so don’t be surprised by that. For a group of 4 including drinks expect to pay 800-1,000 Baht. Undeniably brilliant.

Thai BBQ Bophut in Koh Samui is located within walking distance from Fishermans Village about 50 meters before the Bophut traffic lights on the left coming from Chaweng, right opposite Bophut temple (the big yellow wall). It is easily identified by the series of neon light outside and is usually packed with local Thais and the odd westerner (usually a local expat). There is plenty of parking for both cars and motorbikes inside and on the road outside.

There are several Thai BBQ’s around Koh Samui, the other most notable one being in Mae Nam where I prefer the marinades on the meat.

Top Tip: Go between 6pm and 7:30pm when it is usually quieter, when all the food is at its freshest and you dont have to wait for the staff to being out more stuff.

To combat people abusing the self-service and not eating the food they have taken, most Thai BBQs charge 100 Baht per item left. There is a little leniency but leaving plates full at the end will get you charged.

Eat Sense Restaurant on Chaweng Beach has six distinct dining areas including two that are fully air-conditioned and four areas that are non-smoking. And yet none are but a few steps from the beach.

As Koh Samui’s most recommended beach restaurant, it will not surprise you that we also have an array of special menus suitable for celebrations, anniversaries, weddings and parties.

Pronounced sa-bee-eng-lay. Sabeing Lae is a seafood restaurant popular with tourists and locals alike. The original restaurant is located in Lamai, just after Hin Ta & Hin Yai (Grandfather & Grandmother rocks) on the sea front and they have added to their success by opening another restaurant close to Tesco Lotus in Chaweng, next to Wimaan Buri resort. Their seafood is truly top class and very very affordable. The staff are friendly and accommodating, the food is served at a reasonable pace and the restaurant, particularly the newer one in Chaweng looks sensational.

An alternative to Thai food but still from the same continent. Noori serves the best Indian food on Koh Samui and their service is excellent. It’s located in central of Chaweng on Chaweng Beach Road opposite Chaweng Buri Resort Hotel.

Truly world class cuisine. Nikki Beach’s Sunday brunch is famed for being top class and out of this world.

Located in Chaweng about 200m before the one way road in the Thai market, Mitra freshly prepares and serves a wide range of affordable and tasty Thai food. The staff are extremely friendly, accommodating and fun, earning a regular following on Koh Samui.

Thai food is internationally famous. Whether chilli hot or comparatively blends, harmony is the guiding principle behind each dish. Thai cuisine is essentially a marriage of centuries-old Eastern and Western influences harmoniously combined into something uniquely Thai.  The characteristics of Thai food depend on who cooks it, for who it is cooked, for what occasion and where it is cooked. Originally, Thai cooking reflected the characteristics of a water borne lifestyle. Aquatic animals, plants and herbs were major ingredients. Large chunks of meat were eschewed. Subsequent influences introduced the use of sizeable chunks to Thai cooking.

With their Buddhist background, Thais shunned the use of large animals in big chunks. Big cuts of meat were shredded and laced with herbs and spices. Traditional Thai cooking methods were stewing and baking, or grilling. Chinese influences saw the introduction of frying, stir frying and deep-frying. Culinary influences from the 17th century onwards included Portuguese, Dutch, French and Japanese. Chilies were introduced to Thai cooking during the late 1600s by Portuguese missionaries who had acquired a taste for them while serving in South America.

Thais were very adapting at ‘Siamese-using’ foreign cooking methods, and substituting ingredients. The ghee used in Indian cooking was replaced by coconut oil, and coconut milk substituted for other daily products. Overpowering pure spices were toned down and enhanced by fresh herbs such as lemon grass and galanga. Eventually, fewer and less spices were used in Thai curries, while the use of fresh herbs   increased. It is generally acknowledged that Thai curries burn intensely, but briefly, whereas other curries, with strong spices, burn for longer periods. Instead of serving dishes in courses, a Thai meal is served all at once, permitting dinners to enjoy complementary combinations of different tastes.

A proper Thai meal should consist of a soup, a curry dish with condiments, a dip with accompanying fish and vegetables. A spiced salad may replace the curry dish. The soup can also be spicy, but the curry should be replaced by non spiced items. There must be a harmony of tastes and textures within individual dishes and the entire meal.

Thai food is eaten with a fork and spoon. Even single dish meals such as fried rice with pork, or  steamed rice topped with roasted duck, are served in bite-sized slices or chunks obviating the need for a knife.  The spoon is used to convey food to the mouth.

Ideally, eating Thai food is a communal affair involving two or more people, principally because the greater the number of diners the greater the number of dishes ordered. Generally speaking, two diners order three dishes in addition to their own individual plates of steamed rice, three diners four dishes, and so on. Diners choose whatever they require from shared dishes and generally add it to their own rice. Soups are enjoyed concurrently with rice. Soups are enjoyed concurrently with other dishes, not independently. Spicy dishes, not independently. Spicy dishes are “balanced” by bland dishes to avoid discomfort.

The ideal Thai meal is a harmonious blend of the spicy, the subtle, the sweet and sour, and is meant to be equally satisfying to eye, nose and palate. A typical meal might include a clear soup (perhaps bitter melons stuffed with minced pork), a steamed dish (mussels in curry sauce), a fried dish (fish with ginger), a hot salad (beef slices on a bed of lettuce, onions, chilies, mint and lemon juice) and a variety of sauces into which food is dipped. This would be followed by sweet desserts and/or fresh fruits such as mangoes, durian, jackfruit, papaya, grapes or melon.

What does a Thai meal consist of?

Tidbits:
These can be hors d’oeuvres, accompaniments, side dishes, and/or snacks. They include spring rolls, salty, puffed rice cakes with herbed topping. They represent the playful and creative nature of the Thais

Salads:
A harmony of tastes and herbal flavors are essential. Major tastes are sour, sweet and salty. Spiciness comes in different degrees according to meat textures and occasions.

General Fare:
A sweet and sour dish, a fluffy omelet, and a stir-fried dish help make a meal more complete.

Dips:
Dips entail some complexity. They can be the major dish of a meal with accompaniments of vegetables and some meats. When dips are made thinly, they can be used as salad designs. A particular and simple dip is made from chilies, garlic, dried shrimps, lime juice, fish sauce, sugar and shrimp paste.

Soups:
A good meal for an average person may consist simply of a soup and rice. Traditional Thai soups are unique because they embody more flavors and textures than can be found in other types of food

Single Dishes:
Complete meals in themselves, they include rice and noodle dishes such as Khao Phat and Phat Thai.

Desserts:
No good meal is complete without a Thai dessert. Uniformly sweet, they are particularly welcome after a strongly spiced and herbed meal. 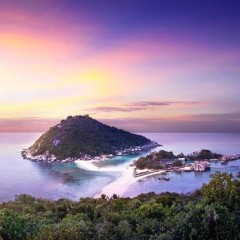